Q. What is Glaucoma? 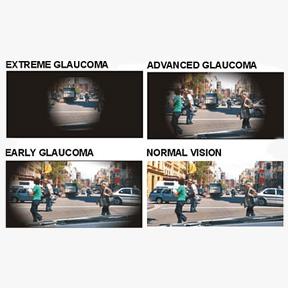 A. Glaucoma is a group of disorders. What they all have in common is an increase in the pressure inside the eye. When the pressure is too high, damage occurs to the optic nerve. The optic nerve is made up of a bundle of nerve fibers which sends signals to the brain. Damage to the optic nerve can initially cause blind spots at the outer edges of the field of vision called peripheral or side vision. This is the main sign of glaucoma. As damage to the optic nerve gets worse, the visual field can shrink leading to tunnel vision or even loss of central vision affecting a patient’s ability to read. Fortunately, this occurs only in patients with very severe disease.

There are several types of glaucoma all of which can increase IOP and damage the optic nerve.

In open angle glaucoma, an increase in resistance to the outflow in the canal causes a rise in the IOP. This type develops gradually and the symptoms may not be obvious till the damage has occurred. The patient may lose peripheral vision, leaving only central or ‘tunnel’ vision. This occurs more among people above 45 years of age.

In angle closure glaucoma there is a relative block to the flow of fluid, which causes raised pressure. This occurs more among long-sighted people. In the rarer acute cases, the symptoms are dramatic and may include severe pain in the eye, headache, nausea, reduced vision, and seeing rainbow coloured rings around lights. Stress, anxiety, and reading may also precipitate an attack, which may resolve on its own, but recur after some time.

The more common variety of angle closure glaucoma is chronic angle closure. This behaves similar to open angle glaucoma but here, the ‘drainage’ canal is closed by the iris.

Glaucoma or high IOP may also be secondary and occur due to other causes such as the use of steroid drops without prescription. Such drops should never be used without monitoring the intraocular pressure

Q. Who gets Glaucoma?

A. The genetic inheritance of glaucoma is still unclear. However, a family history of glaucoma has been found in up to 50% of patients with the most common type of glaucoma, known as primary open-angle glaucoma. One type of glaucoma occurs in people who have had a history of being hit in the eye (e.g. soccer ball). Not only can they get a rise in pressure initially after the injury, but they also may develop glaucoma years later. All of these things stress the importance of regular eye exams.

Q. How do I know if I have glaucoma?

A. Unfortunately glaucoma is typically associated with painless and progressive loss of vision that may escape detection by the patient. This once again stresses the importance of a thorough eye history and examination, especially in patients with a family history of glaucoma. Only one type of glaucoma called angle-closure glaucoma is associated with a red, painful eye with blurred vision and even possibly nausea and vomiting. This is due to very high pressures resulting from a block in the drainage system of the eye. Most patients at risk for this type of glaucoma have structural differences in their eye which could be identified prior to an attack and preventative treatment could be performed. Rarely do patients with other types of glaucoma develop pressure high enough to have pain and redness.

Q. How is glaucoma treated?

A. The primary goal of treatment is to preserve vision. The typical first line of treatment is eye drops which lower the intraocular pressure by helping fluid leave the eye or by reducing the amount of fluid produced in the eye. Some patients may need to take multiple different types of eye drops or even eye drops plus medications in pill form to effectively lower the pressure. In addition, there are laser treatments for both angle closure and open angle glaucoma. Laser treatment for angle closure glaucoma is usually performed to prevent an acute attack as described above; while laser treatment for open angle glaucoma is performed when medications are not effective enough or the patient has difficulty taking medications. Surgery, which involves making a drainage system for the fluid in the eye, is usually performed when medications and lasers are ineffective.