Symptoms of uveitis may include:

The eye is like a camera with a lens in front and a film (retina) at the back. The retina is located approximately two centimeters behind your pupil. It is shaped like a small cup. The retina converts the ocular image into a signal that is sent to the brain. The central part of the retina, called the macula, is used for straight-ahead vision and what is in your direct line of sight.

A healthy macula is crucial for tasks involving fine vision such as reading, recognizing faces and distinguishing things. The area surrounding the macula helps in mobility and in seeing from the ‘corner’ of the eye, though it is not useful for fine work. The retina is connected to the brain by the optic nerve. Blood is supplied to the retina and the optic nerve by blood vessels that maintain the health of these tissues. In front of the retina is the vitreous cavity, which is filled with a gel-like substance, called the vitreous.

Diseases of the retina, the vitreous, and the optic nerve can cause serious vision problems. Fortunately, most of them can now be managed satisfactorily with modern methods of diagnosis and treatment. This link will help you understand the treatment of diseases of the retina and the vitreous. Remember, early diagnosis and prompt and appropriate treatment can result in a better outcome.

Laser Treatment of the Retina

A laser is a pure, high-intensity beam of light energy. The laser light can be precisely focused onto the retina, selectively treating the desired area while leaving the surrounding tissues untouched. The absorbed energy creates a microscopic spot to destroy lesions or weld tissues together.

Laser surgery is usually painless; at the most it may cause temporary discomfort. It is usually performed in the operating room while the patient is awake and comfortable. In rare cases, anesthesia is given those patients who cannot tolerate the discomfort or to children to keep them still during treatment. The entire procedure lasts 10 to 30 minutes.

A. Lasers are commonly used to treat the following eye conditions:

The retinal blood vessels are like pipes, bringing blood into and taking it out of the back of the eye. In diabetes, however, the vessels may leak, causing the retina to swell and not work properly. When the swelling involves the central area of retina vision may be affected. (This is known as diabetic macular edema.)

Laser treatment can seal the leaks, thereby preventing further vision loss. In some patients new retinal blood vessels may grow, which will replace some of those that have closed due to diabetes. (This is known as proliferative diabetic retinopathy). This new retinal blood vessel, unlike the normal blood vessel, has a tendency to bleed inside the eye, resulting in decreased vision. Laser treatment can often prevent severe vision loss by making these new vessels regress.

The small blood vessels that drain the blood from the retina (retinal veins) can sometimes get blocked (retinal vein occlusion). This is more common in patients with diabetes or high blood pressure. A retinal vein occlusion can cause the retina to swell with fluid and blood, blurring central and peripheral vision. At other times, new blood vessels may grow and cause pain as well as very high pressure inside the eye (neovascular glaucoma).

Q. What is retinopathy of prematurity?

A. Retinopathy of prematurity (ROP) is a potentially blinding eye disorder that primarily affects premature infants weighing about 23/4 pounds (1250 grams) or less that are born before 31 weeks of gestation (A full-term pregnancy has a gestation of 38-42 weeks). The smaller a baby is at birth, the more likely that baby is to develop ROP. This disorder-which usually develops in both eyes-is one of the most common causes of visual loss in childhood and can lead to lifelong vision impairment and blindness. ROP was first diagnosed in 1942. 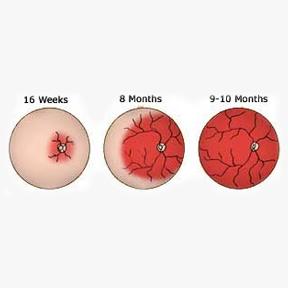 Q. Are there different stages of ROP?

A. Yes, ROP is classified in five stages, ranging from mild (stage I) to severe (stage V):

Stage I – Mildly abnormal blood vessel growth. Many children who develop stage I improve with no treatment and eventually develop normal vision. The disease resolves on its own without further progression.

Stage II – Moderately abnormal blood vessel growth. Many children who develop stage II improve with no treatment and eventually develop normal vision. The disease resolves on its own without further progression.

Stage III –Severely abnormal blood vessel growth. The abnormal blood vessels grow toward the center of the eye instead of following their normal growth pattern along the surface of the retina. Some infants who develop stage III improve with no treatment and eventually develop normal vision. However, when infants have a certain degree of Stage III and “plus disease” develops, treatment is considered. “Plus disease” means that the blood vessels of the retina have become enlarged and twisted, indicating a worsening of the disease. Treatment at this point has a good chance of preventing retinal detachment.

Stage IV – Partially detached retina. Traction from the scar produced by bleeding, abnormal vessels pulls the retina away from the wall of the eye.

Stage V – Completely detached retina and the end stage of the disease. If the eye is left alone at this stage, the baby can have severe visual impairment and even blindness.

Most babies who develop ROP have stages I or II. However, in a small number of babies, ROP worsens, sometimes very rapidly. Untreated ROP threatens to destroy vision.

Q. Can ROP cause other complications?

A. Yes, Infants with ROP are considered to be at higher risk for developing certain eye problems later in life, such as retinal detachment, myopia (nearsightedness), strabismus (crossed eyes), amblyopia (lazy eye), and glaucoma. In many cases, these eye problems can be treated or controlled.

Scientists believe that the periphery of the retina then sends out signals to other areas of the retina for nourishment. As a result, new abnormal vessels begin to grow. These new blood vessels are fragile and weak and can bleed, leading to retinal scarring. When these scars shrink, they pull on the retina, causing it to detach from the back of the eye.

Q. Are there other risk factors for ROP?

A. In addition to birth weight and how early a baby is born, other factors contributing to the risk of ROP include anemia, blood transfusions, respiratory distress, breathing difficulties, and the overall health of the infant.

An ROP epidemic occurred in the 1940s and early 1950s when hospital nurseries began using excessively high levels of oxygen in incubators to save the lives of premature infants. During this time, ROP was the leading cause of blindness in children in the US . In 1954, scientists funded by the National Institutes of Health determined that the relatively high levels of oxygen routinely given to premature infants at that time were an important risk factor, and that reducing the level of oxygen given to premature babies reduced the incidence of ROP. With newer technology and methods to monitor the oxygen levels of infants, oxygen use as a risk factor has diminished in importance.